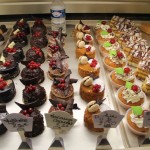 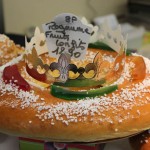 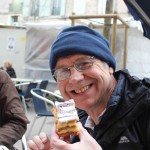 Down to Pezenas market on Saturday morning and Michael takes loads of photos of the stalls, us buying stuff and the old medieval part of the town – it’s really nice to have some pictures of the two of us and some of the sights of Pezenas that we’ve got used to over the last two months. The boulangerie was a big hit and Michael’s demolition of the mille-feuilles was impressive.

After a late lunch, we headed back to Montpellier for our third (Gillian and Michael’s first) visit to Stade Yves du Manoir for the rugby game against the Italian team Treviso. It wasn’t a great game (24 – 6) or a great crowd but we enjoyed the evening out. We took some sandwiches, quiche, tomatoes, muffins and a flask of tea for half time. My rucksack was checked at security and they confiscated the tupperware boxes the picnic was in! Pourquoi? Vous pouvez les jeter! (You could throw them!) I had to decant the picnic into the rucksackand collect the tupperware at the end of the match. Endless teasing about being an ageing hooligan.

Make sure you click on the thumbnail image to see the bigger version.