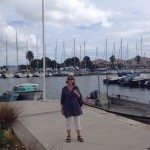 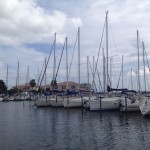 A quiet start to the week – on Tuesday afternoon we decided to re-visit an old haunt – Meze with its pretty harbour on the Etang de Thau.  Meze is not too far, about 25 minutes, and we pretty much knew where we were going. We’d forgotten how nice it was and we had a good wander around the port and all along the coast. It was livelier on a warm October afternoon than the last time we visited on Barb’s birthday back in January with Michael and Gillian. There were several nice looking restaurants with quite a few people sitting outside in the sunshine. We promised ourselves we would come back and have lunch.

On Wednesday we set ourselves the fitness challenge (well, challenging for Barb, easy peasy for Derek) of cycling into Pezenas, doing the San Simeon walk with its steep slope and cycling home in time for lunch.  The flask of coffee and panettone safely stowed in the panniers, hats and suntan lotion on, we did it in two and a half hours and completed this ‘old bids triathlon’ with a third stage in the pool – well, we dangled our feet and legs in. 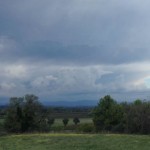 A fabulously sunny day though a really threatening black cloud full of thunder rolled by late afternoon – we were on guard to close up and shut down but it just passed on by without incident.

Today, Thursday, we planned a full day trip along the coast beyond Montpellier.  Our destination – Aigues Mortes – an ancient walled town built in the 13th century by Louis IX from where he would set off on the Crusades.  It was really impressive, not at all busy but very warm (27°).  Walking all around the ramparts took nearly an hour but we got great views of the salt pans and waterways outside the town and all the houses and apartments inside. It’s a bit touristy but stunningly preserved and a great example of a stone built fortress. 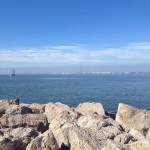 After lunch we drove to Port Camargue and Le Grau du Roi (only just managing to escape the car park as there was yer another ‘Route Barré and a whole set of diversion signs sending you around in circles) and had a little look around.  Port Camargue has a huge marina and lots of holiday villas; Le Grau du Roi was originally a fishing village, a pretty, touristy sort of place.  There are lots of canals, marshland and etangs and boats and we also saw a few wild flamingoes. 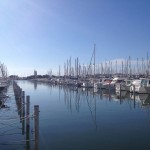 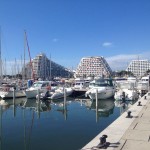 On to La Grande Motte – a much bigger town, beautifully landscaped and much more modern. It’s full of apartments and boats all set around a massive marina and it’s presumably where all the residents of Montpellier head to at weekends. Lots of cafes and restaurants and some of the biggest and most beautiful boats I have ever seen. Sea, sunshine and boats – awesome!

We stopped for a drink at one of the marina cafes and Barb ordered citron pressé – possibly the sharpest lemon drink I’ve ever tasted. Again, we need to come back and spend a full day wandering around and sampling the food.

We headed back to Montpellier and the A9 Peage, drove back to Castelnau and had tea and cake by the pool.