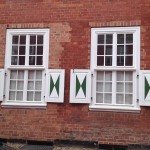 Rain was forecast today so we decided not to cycle – in fact the weather stayed dry despite black clouds. Caught the 10.15 SBahn train to Potsdam, popped into Tourist Information at the station, bought a map and two tickets for the open top bus tour, grabbed a coffee and muffin and we were off! Saw all the main sights – Luisenplatz, Glienicker Brucke (the spy swap bridge), loads of grand buildings, KGB headquarters and Sanssouci Schloss and its gardens. We had a nice stroll around the old Dutch quarter and went into the Jan Bouman Haus where we made the mistake of starting a conversation with the receptionist who spoke no English – lots of arm waving and going blue in the face ensued! 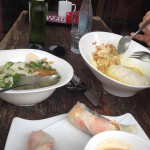 We made a few adventurous moves with food choices today. We had the hotel’s buffet breakfast – Derek mistook smoked liver sausage for smoked cheese. He had so much trouble unwrapping it that he decided to eat it anyway – a mistake he says he won’t repeat. For lunch we went to a Vietnamese cafe in Potsdam with great success – coconutty curry, noodly veggie soup and spring rolly things with satay. It was fab.