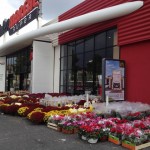 Yesterday was a public holiday here – la Toussaint – a day to remember the dead.  French cemeteries are very much a part of villages and yesterday was a big occasion to decorate graves with flowers.  Huge bowls of chrysanthemums were on sale everywhere, brightening up supermarket car parks with lovely colours.  I have learned that you shouldn’t give chrysanthemums to someone as a gift – they are for dead people! 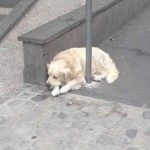 Bouba has a little sleep at the market!

Pezenas market was on as usual in the morning though so we cycled in and really enjoyed our habitual Saturday jaunt.  We are getting a bit braver each week about what we buy and this week got some pork loin and sausages from the ever popular ‘vans’ that attend the market.  They are quite daunting as the confident French women always know what they want but in fact the stall holders were really friendly, chatty and helpful and once we got close-up, the meat looked really good quality and well trimmed. 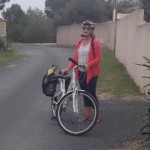 honey and eyed up the big nets of walnuts which have suddenly appeared.  I’m making a banana and walnut loaf this morning using up the last of the walnuts from the garden at Chevanceaux where they were lying around all over the ground.

Halloween is also celebrated here – the village had a communal family supper so that children could dress up.  There was a special menu including ‘dessert sanglant’ – something red and sticky no doubt.  As in the UK, it’s an American import and not really part of French mainstream culture.  We had a little group of four children knock on our door and had to raid our car sweets to give them some.