A stay of three weeks in one place seems quite settled by our recent experiences and we’ve got back to doing quite a lot of cooking.  I bought a cookery magazine in WH Smith at Eurotunnel  and we’ve been trying a few new recipes.  It took three visits this week to supermarkets at nearby Montendre and Montguyon to get stocked up and we’ve also been to the local grocery store, boulangerie and market in Chevanceaux!!

We’ve had some good grub though – highlights include
Lovely fresh fish from the supermarket – we bought mackerel, prawns and cod
Sardine rillettes – recipe from Jack in The Guardian
Derek made roasted veg with Toulouse sausages
Chicken salad with bacon and sweet corn – vinaigrette mixed with mayo for the dressing
I made my first beef biryani which we really liked
Thai cucumber salad – I braved red chillies!

We’ve been trying not to eat too much bread but the boulangerie is full of temptation and the local pains aux raisins are fantastic.

Derek loves the wine and is currently drinking very chilled Muscadet and is even putting the red wine in the fridge.

We haven’t eaten out yet but are driving over to the Gironde estuary tomorrow so hope to find a fish restaurant for lunch.

Meanwhile, back in London, Danny watched the last stage of The Tour of Britain and took this photo of Wiggo and Cav. 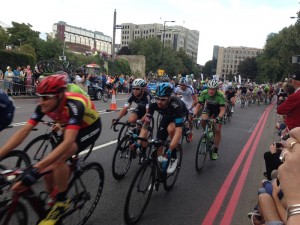