Our last Monday and I decide to go for a very long ride. We visited local markets on Saturday and Sunday which were quite disappointing really. I think we were spoilt by the size and variety in Pezenas – the markets here have been very small and quite basic. Not the range of products we have been accustomed to. We did do a couple of lovely walks however – the booklet of 30 local routes has been well used and we’ve not found a dud one yet.

So – having skipped my usual Sunday morning ride I set out on the longest one yet and planned to go through several local villages. The weather was bright and sunny but cooler than of late and the early start meant a base layer and arm warmers. It was windy too so the new Sky gilet also got an airing. 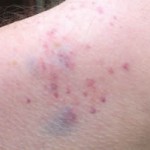 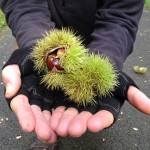 The ride went well even though I was chased by a dog at one point and the combination of hills and headwind were, at times, a struggle. I stopped twice to replenish lost calories – the usual baguette with butter and jam – and drank a lot in the heat ( by the end of the ride the temperature was hovering around *80 degrees). Into the last few miles I was feeling good and started to push for home through a short stretch of woodland – at that moment the wind seem to pick up and unfortunately I was right under a horse chestnut tree. A small hand grenade size conker, wrapped in its protective spiky casing hit me from above and managed to take out my arm and leg. A serious wobble but I thought no more about it until I looked down to see a bleeding leg and blood stained shirt. The spikes had left their mark and managed to do a fair bit of damage to my skin! The shoulder is now seriously bruised and pock marked.

I must be the only rider to nearly get taken out by conkers!!