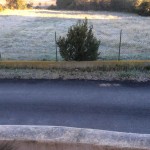 A chilly start – in fact there was quite a heavy frost but the sky is blue and the sun is shining. Virtually no wind so I’d planned a long bike ride up towards Bédarieux. The route took me north to Caux and on to Neffies and up and over la Rouquette. Further north to Cabrieres and then through the hills to Valmascle. It was just about 2 hours to this point and here I turned back south towards La Montade, Gabian, Pouzoles and Tourbes. Arriving back at the villa about 2.00 I’d covered just under 50 miles and taken 4 hours. There were some of the biggest climbs I’d done here in France and because of the weather which got better and better, I really enjoyed it.

After a quick recovery it was off to Intermarche to do the bulk of the Christmas shop and then to Carrefours to pick up a few things they didn’t have. I also bought diesel at €1.09 a litre!!

In the evening we watched the first of the BBC Christmas offerings – pretty awful really and caught up with emails and a bit of work. As we seem to have rather a lot of logs – nicely cut up now – we decided to try and keep the fire in overnight.

Another chilly start, the day started with porridge. It was log splitting and cutting for me while Barb did her exercises. She’s been doing this conscientiously while we’ve been away (with a few little breaks) and largely succeeded in clearing up the back problem that plagued her before we set off on our travels. The fire stayed in overnight – a gentle glow when we got up turned into a roar when I opened the vents and we quickly had a good fire going. By 11.00 we were ready to head into Pezenas on the bikes to try and order a cooked chicken for Christmas Eve pick-up. We closed up, got all our gear on and headed for the garage only to find that Barb’s bike had a puncture. Undaunted I removed the wheel, changed the tube and re-assembed everything only to find the back brake seriously rubbing. Another 20 minutes of bike maintenance!! By now it was too late to go in – all shops closed at midday for lunch so we re-think.

Our next task was to give the whole place a good clean in readiness for the Christmas festivities. Vacuuming, mopping, bed making, bathroom cleaning all done. I also get the base for my Christmas Bouillabaisse started and we grab a bit of lunch.

Another failed attempt to get into Pezenas because the back brake on Barb’s bike will not co-operate. Eventually, with some rear wheel re-alignment we set off and get into the market place without further incident. A stroll up to the charcuterie – It’s closed!!! We peer in looking for signs of life and the owner appears at the door telling us he opens again at 4.00. Great!! Barb plunges in with Est-ce-que c’est possible de commander un poulet roti pour demain? Mais oui, il dit. So, after all the trials and tribulations of trying to get in – we succeed in ordering our Christmas cooked chicken from a shop that’s closed!!

Our reward is coffee and cake at Cafe des Arts where we hear lots of English voices – we guess that the Brits have arrived for Christmas. A stroll through the old part of town confirms that the place is buzzing with visitors and many of the shops that have been closed are now open and quite busy. The lights are starting to come on as it begins to get dark so we finish our shopping and cycle back to Castelnau before we lose the light.

This evening we plan to chill in front of the TV again with fresh prawns and French bread.

Tomorrow is Christmas Eve and Danny arrives at 3.00, flying in from Gatwick.