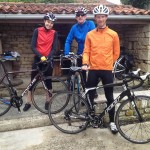 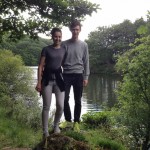 We’ve had a lovely week with Danny and Britt who drove down to St Valerien last Friday having taken the overnight ferry from Portsmouth to St Malo.  The weather has been a bit mixed but they’ve done lots of bike rides (120 mile total) including a 30 miler and a 42 miler as well as visits to Mervent, Fontenay, Vouvant, La Rochelle and Ile de Re.We’ve eaten far too much French food with everyone busy in the kitchen – Danny cooked Chinese, Britt worked wonders with desserts (brioche bread and butter pudding and apricot tarts) and Derek pitched in with his ever reliable Jamie Oliver sausage recipe.  Like our other visitors, they brought supplies of teabags, muesli and murray mints so we are now well stocked up for the coming months. In the evenings, we’ve strolled around the village, played cards and watched TV highlights of the Giro d’Italia and Tour of California.  Danny and Derek talk bikes and bike gear incessantly and Danny is in love with Penny’s dog Lola.

In other news, Derek has survived a visit to the dentist in Fontenay as he managed to lose bits of two different fillings – the only painful part was paying the bill.  He is off to the UK on Sunday for a few days to see business clients.  He’s flying Easyjet from Nantes to Gatwick and borrowing Danny and Britt’s car to drive up to Stratford where he’ll stay at Ambleside with Peter and Ruth. He is looking forward to the trip but dreading putting his Levi’s back on as he’s been in shorts for months now!