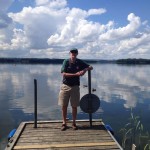 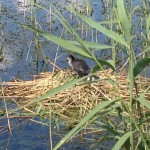 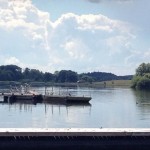 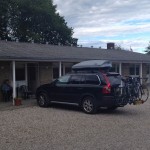 Today should have been an easy three hour drive into Germany to overnight at Ammersbeck again but it had a few challenges! It began well. Derek went off for an early bike ride while I chatted to friendly Danes at the motel – they are very proud of the fact that Skandersborg is the highest point of Denmark at 171m! They also explained that the lack of high ground is responsible for the storm clouds which form when hot air from the south meets cold air from the north plus easterly and westerly winds. 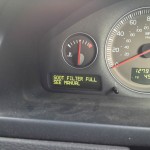 We were to meet these rain clouds as we drove south – the rain in places was horrendous and made driving difficult. About an hour from Ammersbeck a warning message appeared on the Volvo screen, ‘SOOT FILTER FULL CHECK MANUAL’ and the car lost power, going into what we now know is called ‘limp mode’. We contacted Volvo Assist who told us to keep going steadily at 50mph and it should clear – it didn’t. We made it to Ammersbeck and the kind German family who own the apartment called the nearby Volvo dealership for us to arrange an appointment in the morning. Fingers crossed! Germany have just beaten USA to go through to the next stage so at least they’ll all be in a good mood.