The house we are staying in is a semi detached barn conversion which is part of a little settlement of about half a dozen properties in a rural location, optimistically named ‘La Ville’.  The houses on either side of us aren’t occupied at the moment so it’s very quiet and the views are of sunflower fields – the huge sunflower heads looking very dry and brown now.  The house dates back about 200 years and was originally a distillery used for making cognac – when they renovated the ruins in 2007, they found bottles of 100 year old cognac apparently though they don’t say what it tasted like.  The town of Cognac itself isn’t far away and there are lots of vines growing locally. 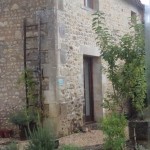 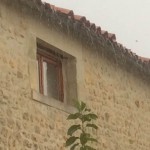 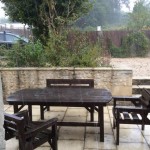 Today started with rain, thunder and lightning – the storm cleared by mid morning and it’s been dry and warm for the rest of the day.  We did a bike ride this afternoon – about 12 miles along a nice flat Tarmac path through woodland – la voie verte or green way.  I worked up enough of a sweat to cool off in the pool when we got back. The water is chilly and I only managed to submerge up to my elbows – better than Derek though who merely paddled his feet.

Derek is busy in his office (kitchen table) dealing with website updates and the usual admin hassles minor (getting a refund from Millets who sent me walking boots, one 6 one 7!) and major (DVLA seem to have lost our new car registration documents).

Anyway, we have now unpacked properly and been to the supermarket – will probably take a walk into the village later to find the local boulangerie. 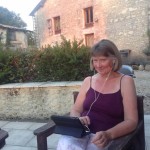 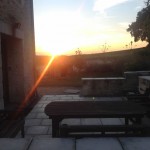 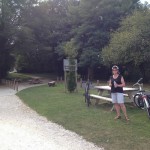 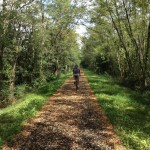 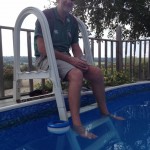 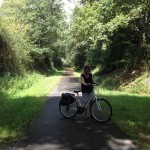